You have already completed the quiz before. Hence you can not start it again.

You must first complete the following:

Quiz complete. Results are being recorded.

a. For the given equation, the arrows are of the same length

This means that both the forward and backward reactions occur at the same speed or rate.

Hence, at the initial stage of the reaction, the forward reaction will be much faster. As the reaction progresses, the concentration of A and B will fall while those of C and D will rise, until gradually the inequality between the rates of the opposing reactions cancel out.

At this “point, the state of chemical equilibrium has been attained – the reaction will proceed in either direction at exactly the same rate.

Once the equilibrium condition has been attained, there is no change in the concentrations of the substances in the reaction mixture because then, products of each reaction (forward and -backward) are being used up as fast as they are being formed simultaneously.

Hence, the equilibrium condition can be described as dynamic rather than static – that is, it is an equilibrium involving the constant interchange of particles in motion, the rate of both forward and backward reactions are exactly equal.

Note: dynamic equilibrium is only possible in a closed system ie. if there is no removal or addition of any of the materials in the system.

ii. Precision refers to the closeness of two or more measurements to each other. Using the example above, if you weigh a given substance five times, and get 3.2 kg each time, then your measurement is very precise. Precision is independent of accuracy. You can be very precise but inaccurate, as described above. You can also be accurate but imprecise.

Note: For example, if on average, your measurements for a given substance are close to the known value, but the measurements are far from each other, then you have accuracy without precision.

a. The strongest intermolecular force between hydrogen fluoride molecules, (HF) is hydrogen bond. 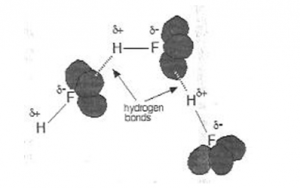 c. EXCEPTIONS OF THE OCTET RULE

Sometimes, central atoms do not obey the octet rule 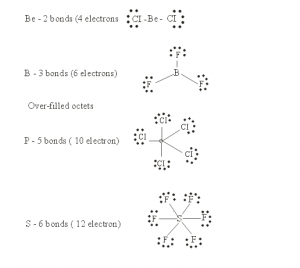 a. Gay-Lussac’s Law: The Pressure Temperature Law. This law states that the pressure of a given amount of gas held at constant volume is directly proportional to the Kelvin temperature. As the pressure goes up, the temperature also goes up, and vice-versa.

The Aufbau principle states that, hypothetically, electrons orbiting one or more atoms fill the lowest available energy levels before filling higher levels (e.g., Is before 2s). In this way, the electrons of an atom, molecule, or ion harmonize into the most stable electron configuration possible.

c.  When a Bransted acid dissociates, it increases the concentration of hydrogen ions in the solution, [H+]. A Bronsted acid is capable of donating a proton.            ;

d. The inert pair effect is the tendency of the electrons in the outermost atomic s orbital to remain unionized or unshared in compounds of post-transition metals.

c. Acid deposition is the process when acidic particles, gases, and precipitation leave the atmosphere. Rain is naturally acidic with a pH of about 5.6 due to dissolved C02, but acid rain has a pH below 5.6 and is caused by oxides of sulfur and nitrogen. Carbon dioxide naturally dissolves in rainwater forming a carbonic acid (a weak acid) solution.

These oxides react with rainwater to form acids:

d.     When fossil fuels are burned, including coal, they produce numerous gases. The two that most contribute to acid rain are nitrogen oxide and sulphur dioxide. Coal has quite a significant nitrogen content, and when burned it reacts with oxygen in the air to form nitrogen oxide. Coal also contains sulpher, when reacted with oxygen, produces sulpher dioxide. C02+-H20->H2COj

e.      Below is the list of effects that global warming is having on the environment, climate, and humankind.

The empirical formula of the compound is CH20

a. The ions that are successfully released at the electrodes depend on three factors

b. Galvanized iron is nothing but a coating of zinc over iron. It is done to prevent the rusting of iron. Zinc is higher (more reactive) in the reactivity series compared to iron. Therefore even when there are small damages on the zinc coating the iron does not get corroded as zinc forms an oxide coating in preference to iron. However, in the case of tin, it is lower in the reactivity series compared to iron. So if there is a small damage on the tin coating iron gets oxidized in preference to the tin and corrodes.

Using the 1st Law of electrolysis:

The element is aluminium

2. Electroplating on one metal by another

Please confirm you want to block this member.

You will no longer be able to:

Please note: This action will also remove this member from your connections and send a report to the site admin. Please allow a few minutes for this process to complete.

You have already reported this
Clear Clear All
error: