A person is said to be unemployed if he is willing and able to work but no work is available for him. Sometimes people are unemployed not necessarily because there are no vacancies in the economy but because they do not possess the necessary skills for the available job or they may be unaware of the existing vacancies.

1. Cyclical or mass unemployment: The most serious cause of unemployment arises from a general deficiency in the purchasing power of the population. Where there is a fall in demand there will be mass lay off of workers. Cyclical unemployment is always associated with the trade cycle.

2. Structural unemployment: This is a serious type of unemployment that arises when a major industry suffers a permanent decline in the demand for its products. It occurs when a change in demand requires the structure of the industry to modify. It occurs if modification is not done fast.

3. Technological unemployment: Technological change may affect many unskilled and semi-skilled jobs. In other words, it arises when machines replace men in the production process. This is common in technologically advanced nations like Europe and America.

4. Seasonal unemployment: This is unemployment associated with the season. In certain jobs, work has to be suspended at some period of the year or where demand is of the seasonal pattern e.g. in agriculture, farming is carried out during the rainy season. But during the dry season, most farmers remain unemployed. Also in the building industry work is suspended at a certain period in a year.

6. Residual unemployment: This occurs among those who are physically and mentally unfit to work. It is caused by disability.

2. Rural-Urban Migration and Neglect of Agriculture: Agriculture has been neglected since the discovery of oil. The oil boom has led to mass migration from rural to urban centres which have led to increases in unemployment in cities and towns in Nigeria.

3. Expansion of Educational Opportunities: There has been very rapid expansion of primary, secondary and tertiary education in West Africa which has given rise to an expanded labour force

4. Problem of Alien Influx: As a result of the free movement agreement of the ECOWAS, there has been a rising influx of foreigners into relatively rich countries e.g. Nigeria and this has led to unemployment in most of these countries.

5. World Wide Economic Depression: As a result of worldwide economic depression, some governments adopt policies which include an embargo on further employment as was the case in Nigeria in 1982. This has increased the rate of unemployment in the country.

6. Absence of Industries: Countries do not have enough industries that can absorb the large number of school leaves every year.

7. Lack of Social Amenities in the Rural Areas: This makes youths prefer to settle in urban areas even when employment is available in rural areas.

8. Defficiency in Demand: A continuous fall in the demand for goods can result in many companies retrenching staff and rendering them unemployed.

1. Increase in crime rate: Lack of job opportunities which results in idleness may make many unemployed youths to get involved in crime, armed robbery, prostitution, drug addiction, advance fee fraud (419), or yahoo yahoo.

3. Increase in dependents: Unemployment increases the number of people that are dependent on others for their survival. They end up sapping the income of their families instead of contributing to them.

4. It causes migration: This can be rural-urban or from one country to another. E.g many educated professionals leave Nigeria for other countries because of a lack of job opportunities. This is referred to as brain drain. It creates a vacuum in a nation and a decrease in economic and social development.

Solution to the Problems of Unemployment

1. Reduction in population growth rate: Optimum population will bring our population to equilibrium point with our resources.

3. Courses like woodwork should be taught. These will make our educational products to be job creators instead of job seekers.

5. Encouragement of labour oriented industries: Small scale but labor-intensive industries should be established in rural areas instead of capital intensive that use more machines.

6. Mechanization of Agricultural Sector: Agriculture should be made more attractive. This should be done by developing agriculture and those in it should earn more salaries and wages so that it can attract the youths.

7. Encouraging geographical mobility of labour: Unemployed people should move to areas other than theirs in order to secure gainful employment if vacancies exist there.

1. Describe any four types of unemployment

2. With diagram explain the wage determination in a competitive market

3. What are the problems facing trade unions in Nigeria.

1. Describe any four types of unemployment

2. With diagram explain the wage determination in a competitive market

3. What are the problems facing trade unions in Nigeria.

1.  Describe any four types of unemployment

i. Frictional unemployment: This is unemployment caused by the time taken for labour to move from one job to another

ii. Disguised Unemployment: It occurs where the marginal productivity of labour is zero due to excessive employment

iii. Under-employment: This occurs where a worker is not fully employed

iv. Residual Unemployment: This is a type of unemployment that occurs as a result of disability or mental illness

2. With the aid of a diagram, explain the wage determination in a competitive market 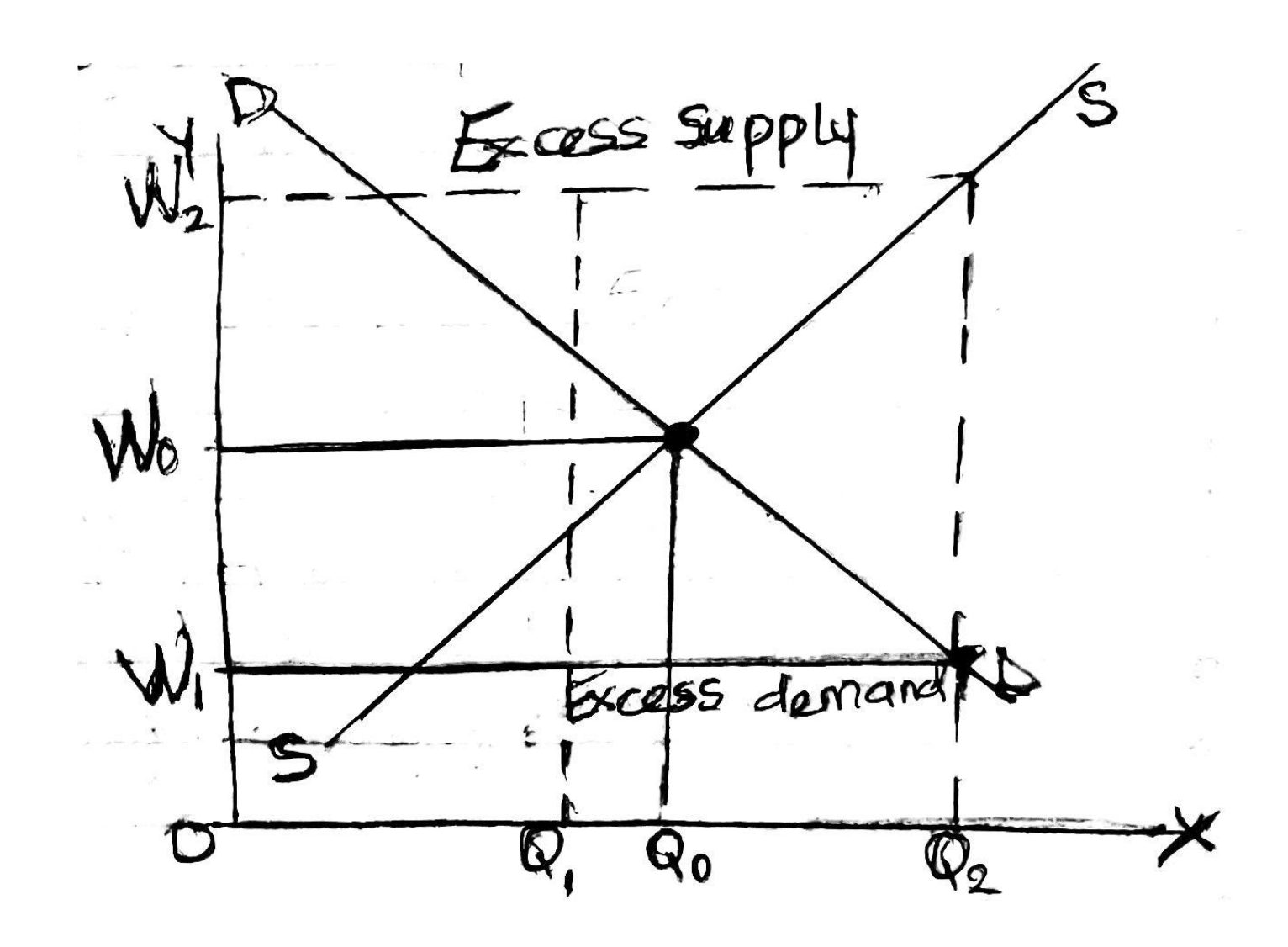 At a competitive wage of “Wo”, the competitive equilibrium was “E” and the unit of labour supplied was Qo

As the union entered the market and set a new wage rate at W2, the industry could only employ Q1 labour while the unit of labour supplied in the market was Q2

3. What are the problems facing the trade Union in Nigeria

ii. Inability of government to help through grants, failure of members to pay.